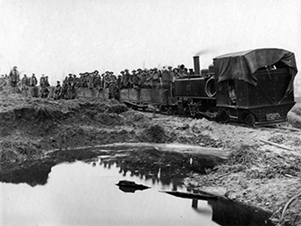 Railways played an essential logistical part on the battle fields of Europe and the Middle East, and at home in support of a far-away conflict. From recruitment trains that arrived at stations in country town across Australia, to the troop trains transporting soldiers and nurses to their point of departure, train-side farewells were felt in every state and territory of Australia. In the theatre of war, the hard work, stoicism and sheer courage of men operating railways in adverse conditions on the front exemplified the fighting spirit and camaraderie of Australians.

Railways 1914 – 1918 presents a thought provoking mix of personal stories, imagery and objects that explores the role of railways at home and on the front in the war to end all wars, the First World War.

This exhibition is currently on display at The Workshops Rail Museum, Ipswich.