You are here: Home » Blogs » 'A Piece of Gallipoli'
Currently filed under: 'Uncategorized'

A Piece of Gallipoli 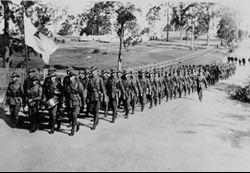 A small exhibition at the Queensland Museum, South Bank exploring the notion of souveniring as a response to the ‘adventure’ of wartime in exotic locations. A Piece of Gallipoli is a small display in the Museum’s Discovery Centre highlighting Australians’ attachment to the place and the legend.

Ever since the first Anzacs landed on its shores in April 1915, Australians have been taking souvenirs home with them. The first were pebbles and as the war progressed, shrapnel, spent shells and other items related to the War were collected. One hundred years later, manufactured souvenirs provide everybody with the opportunity to own a piece of Gallipoli.